Study on FCR and Brain Function

Computer Dynamic Posturography (CDP) is commonly utilized to determine the effects of different sensory conditions on balance. This study utilizes the Bertec Balance Plate to examine the effects of endo-nasal balloon manipulations to the cranial bones has on the vestibular system.
Endo-nasal manipulations have been around since 1940’s. (5) Introduced by chiropractors and naturopaths for head pain (3) (5) ear and sinusitis care (6) (2) (8) (5). It has been taught in accredited chiropractic colleges as an elective coarse (10) (11)(12)(13) as well as many seminar settings over the years. It has not gained acceptance mainly due to the lack of research and uniform methods. Discomfort to patients can be increased with doctor methods and might cause practitioners to discontinue these treatments even in light of the benefit that some patients receive.
Defenition: “The methods of improving the biomechanics of the cranium and improving air flow through the upper nasal chambers through the release of connective tissue restrictions in order to improve oxygenation and circulation of nutrients in and around the central nervous system with the use of latex finger cots through the nasal passage which utilize expansive pressures.”

A series Cranial Release’s was performed where the connective tissues that surround the brain and spinal cord called the Dura Mater are specifically released using endonasal balloon inflations.

The patient is first prepared for the treatment using a vibrocussor and Pettibon Multiple Digital toggled MDT adjusting instrument using a proprietary method.

The patient was testing in a standing position using a slight force to determine the automatic correction of the patient when they are pushed into a certain direction in a certain area on the cranium and pelvis. The results are taken into account and this determines the both the position and the placement of the balloon into the nasal concha. The balloon is inflated until the pressure is slightly released and the balloon has passed through just into the throat.  I did this over 4 consecutive days.

I conducted a comparative study to observe the relationship between the FCR treatment and improvement in brain function using the Bertec balance platform system. The patient was tested prior to starting any care and on the same day that care was performed and then post testing data was collected the day after the last treatment. The Spectrum of data consists of anterior-posterior sway range and lateral sway range gathered pre and post treatment from a randomized selection of patients who underwent treatment.

The gathered data (pre and post) was arranged as a total of all subjects and also divided by gender to show other possible relationships.  The mean of the total data was used to provide a visual description of improvement and charted for reference.  The mean anterior-posterior and lateral sway was used for each test (Flat SEO, Flat SEC, Foam SEO, Foam SEC) to formulate the area on axis per total and by gender.  The bar graph representations are literal interpretations of the data while the area on axis was used to portray balance results as shown via the Bertec balance system.  From the mean ranges, the percent improvement per group was calculated and represented in the tables below. 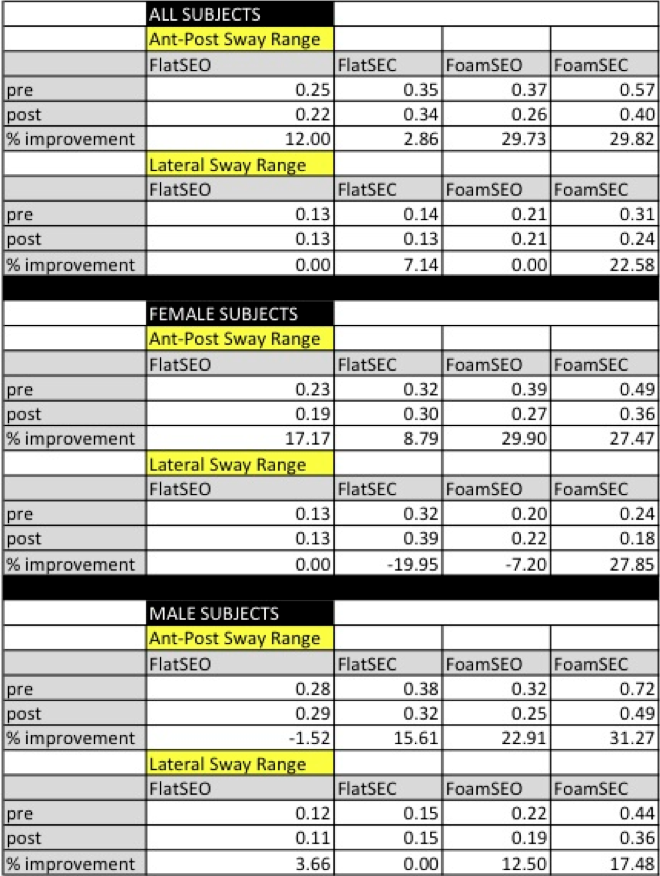 There appeared to be a stronger relationship between the FCR and Balance exam with the male subjects by a slight margin. The lateral sway range was one variable that had only minor differences pre and post. All results for this were at or near zero percent improvement while anterior-posterior sway range saw larger results.

We see here that post treatment the area of the sway is less than pre treatment.  In figure 8 and figure 12 we see the differences in gender. Where the female subjects found most gains with anter-posterior sway it appeared that male subjects made gains in both lateral and anter-posterior.

With sway variability as the measure of postural stability, there was greater age decline in the medio-lateral direction than in the antero-posterior direction (see Teasdale, Stelmach, & Breunig, 1991, for a similar finding)

The first point to note is that despite instructions to give equal emphasis to the cognitive and postural control tasks (`remember as many of the instructions as you can and stand as still as possible’), cognitive activity affected postural stability whereas the reverse was not the case, i.e. postural position had no eåect on cognitive performance. This would appear to contradict a `posture ®rst’ principle (e.g. Shumway-Cook et al., 1997) such that where there is competition between tasks, postural control has priority and is therefore maintained at the expense of other tasks.

However, it is clear that postural position can be shown to aåect cognitive performance if more sensitive cognitive tasks and indices are employed (e.g. probe RT in LaJoie et al., 1996b; random digit generation in Maylor & Wing, 1996), or if the postural control task is difficult (e.g. Tandem Romberg position in Kerr et al., 1985). 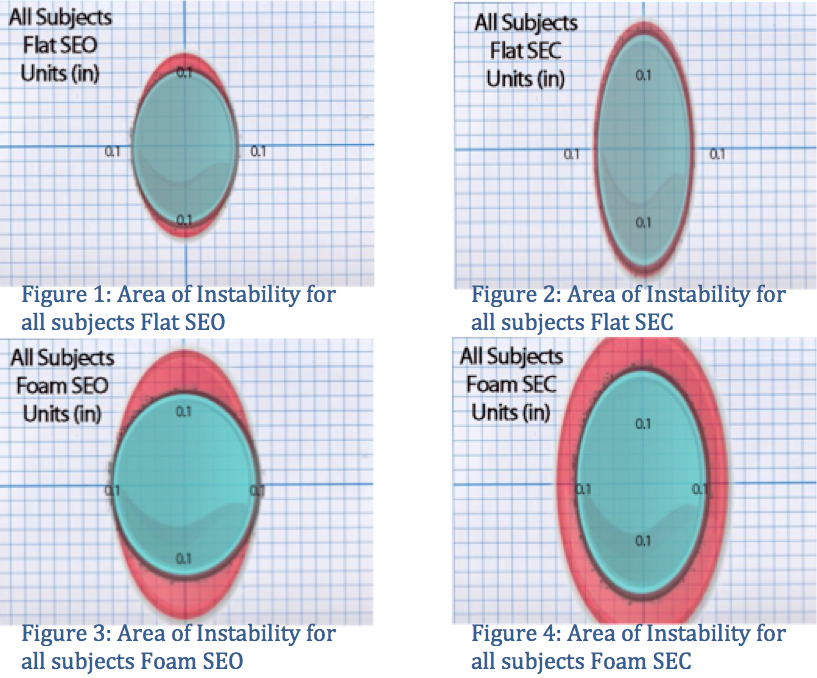 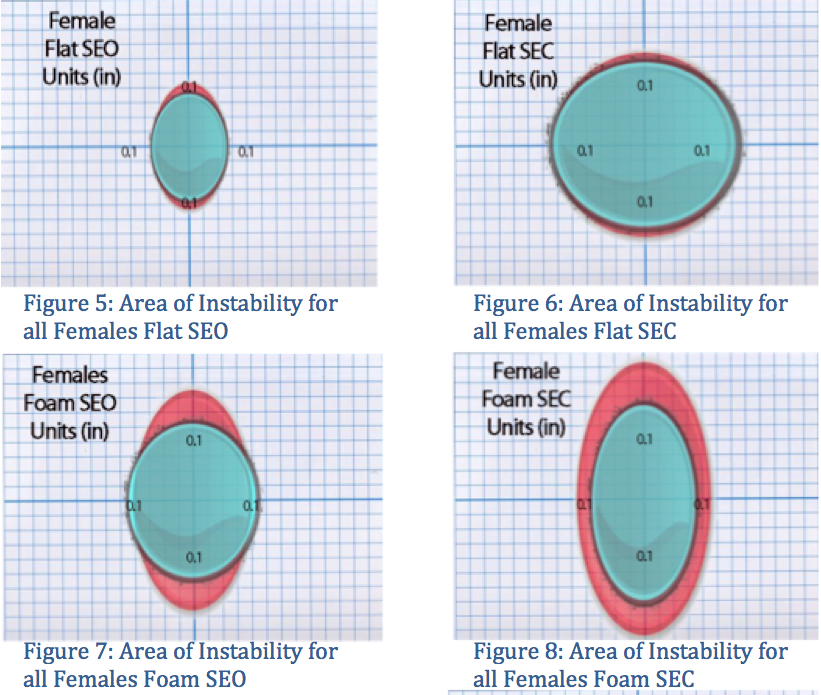 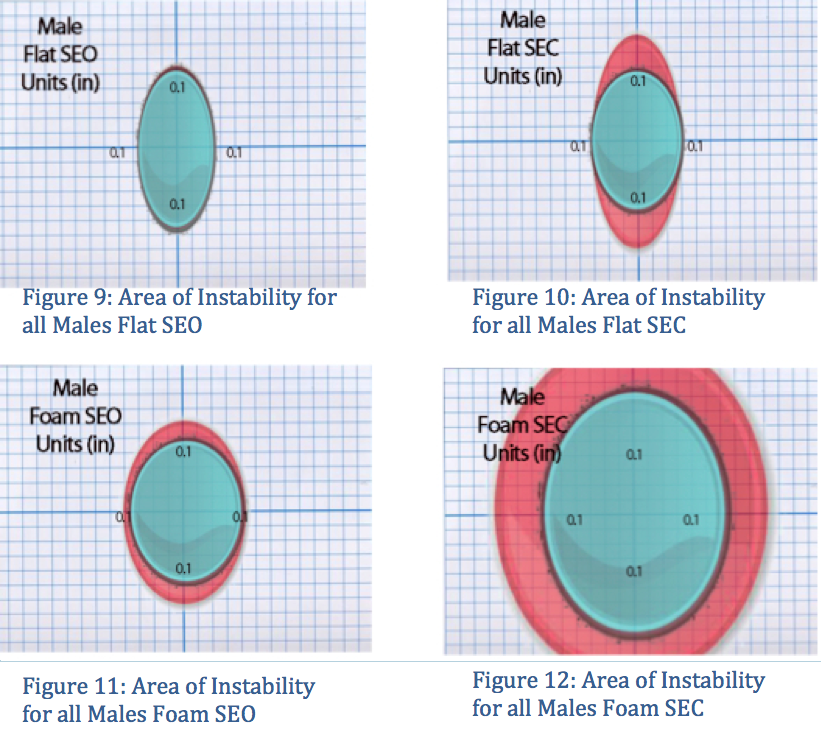 The idea that FCR helps restore the brains ability to oxygenate itself through both improving air flow through the nasal passage and into higher area’s through the nasal passage. Since a significant amount of nitric oxide is produced in the mucosal it is inhaled and supports oxygen absorption into the lungs and on a cellular level. (++) Slight cranial movement called cranial rhythm is a normal pumping action inherent of the skull bones. It is believed to assist in the distribution of nutrients such as oxygen and neurotransmitters that bath the central nervous system maintaining proper fuel delivery to the neurons of the brain. The result is improved cerebellar function and vestibular output. It can be postulated that when the area’s of the brain responsible for core stability may have improved resting membrane potential and increased frequency of firing of the neuronal pools. FCR and endo-nasal balloon manipulations are currently not understood well due to the lack of research into the subject. The results in the study suggest that these methods have a positive effect on brain function and balance. It would be beneficial to do a larger population and examine other aspects of brain function that FCR is effecting.

Get in Touch with us

Get solutions to your problems from our experts!